In honor and recognition of Veterans Day, we are privileged to share veteran Lubin Hunter's story. 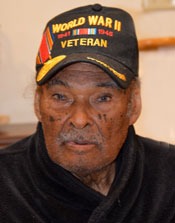 103 year-old Algonquian Indian, Lubin Hunter was born May 28,1917, on Shinnecock Indian Nation in Southampton, New York, where he still resides. He left Shinnecock in 1936 to attend Brooklyn College and was employed at the Brooklyn Navy Yard as a ship's caulker.

Lubin worked on the battleship USS Iowa in 1940 and the USS Missouri in 1941. Although the United States provided support to its allies, it was not until the attack on Pearl Harbor 1941, that the United States officially joined World War II. Lubin enlisted immediately into the Army Air Corps, later known as the Air Force, from 1941-1942.

He flew bombing missions in the Pacific as a gunner aboard B-17s. Despite the devastation of war, he preserves a significance to his sacrifice to protect the United States, for which we, the people of the stony shore Shinnecock Indian Nation give Uncle Lubin our lasting gratitude!

Learn about our Native projects, services, and resources