In honor and recognition of Veterans Day, we are privileged to share veteran Adrian Jody Edmo's story. 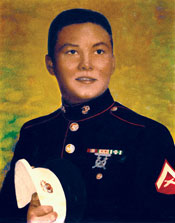 He's suffering the after effects of the Vietnam War with post traumatic stress disorder (PTSD), diabetes, and cancer that he believes is from exposure to Agent Orange — an herbicide that was used to kill the foliage in the jungles of Vietnam. He was initially diagnosed with cancer in 2000, was in remission but now it has come back. He gets injections every three months to prevent the spread of the cancer.

An expert marksman, Jody served in the Vietnam War from 1967 to 1970. He was one of around 197 snipers in the war. Snipers were highly prized and protected – treated similar to officers, he said. Wherever there was shooting, that is where he went

It was dangerous he said. “I prayed every day to see the sun come up, for it to go down and to see the night through.”

He enlisted in the U.S. Marines while still attending Fort Sill Indian School in Oklahoma and entered after graduation. He went through the recruit depot at San Diego, California, then basic training at Camp Pendleton.

Jody said he volunteered for scout sniper training because he had high scores on the rifle range – 223 – an expert on the range. His late father, Leland Pinno Edmo, taught him how to hunt and shoot. He said he waxed out the course with a Remington .700 with a 3 x 9 variable scope. He went overseas at 18 years of age.

Despite the honors, he said, “It ain't something to take human life – it's something you have to live with the rest of your life — it's not good and I have a lot of bad dreams,” Jody continued. “It still bothers me to this day — I have to get away out in the mountains where it's quiet and get back to Mother Nature. I feel the solitude and get away from society — it heals your body and soul.”

He was treated for PTSD at Madigan Army Medical in Tacoma, Washington, which helped him deal with anger and learned how to deal with the stress. “I had to deal with a lot of things in my mind for taking lives — I really couldn't stand authority, just couldn't hold anything down or handle past experiences.” He also did a lot of drinking.

Edmo said when he returned home, he came back here “pretty embarrassed by a few of our tribal members who called me a baby killer — I still remember them to this day”.

“I hope we never fight another undeclared war – we sent our people in harms way – let the politicians run it – we were fighting without a purpose,” he continued.

The Vietnam War was controversial because many viewed it as having no way to win. According to war historians, U.S. leaders lost the American public's support for the war. It became a benchmark for what not to do in future U.S. conflicts.

He viewed himself as a compassionate person and had a lot of feelings for the Vietnamese people. “They were just like us – to see how the Americans treated them and I couldn't do nothing about it,” he continued.

He is thankful to the late Daniel Posey from the Wind River Reservation who saved his life. Jody was nearly hit by a hand grenade that he didn't see but Posey grabbed him and flipped him over. “If he hadn't done that, I wouldn't be alive today,” he said.

After dealing with his issues, Jody went to work as an ironworker with the local 732 in Pocatello for 15 years. He also worked as a boilermaker out in the field for 11 years on power plants in Arizona, New Mexico, Wyoming, and Montana.

He had to retire when he got cancer because the radiation treatments took his strength away. “I wasn't myself anymore,” he continued.

Today he spends time with his wife, Nina, who he met while attending Haskell, his three daughters, grandchildren, and great grandchildren.

He taught his grandson, Caine, how to hunt and shoot and he lets him do the hunting. “I just drive,” Jody said. He also intends to teach Caine how to trap as he used to be a trapper when fur prices were good.

He was honorably discharged from military service in 1973.

“I did my duty for my country, I served,” he said.

Learn about our Native projects, services, and resources